Orange Marmalade Glazed Ham - Why stand in line to buy an expensive glazed ham when you can make one at home that is even more delicious? Easy too - let me show you how!
Jump to Recipe Print Recipe

Orange Marmalade Glazed Ham is the perfect combination of salty and sweet with just a hint of spicy! If you're making a holiday ham, this is the easiest and most delicious glaze that coats the ham with a sticky sweet glaze!

If you have leftovers, be sure to make this recipe for Cheesy Ham and Potato Casserole - it's the best!

We celebrated Easter a little early at the house! My folks came into town last week and so we made our holiday ham just a little early!

I put it in the oven in the afternoon and glazed it before we took off for the airport. Since the airport is only 15 minutes away, we breezed in picked up Mom and Dad came home and took this beauty out of the oven.

How fabulous is that?

It was great having my folks here. We visited the camera store (you know 'cause Dad and I are camera nuts!) Ate just about everywhere and everything! Made barbecue and made homemade ice cream. You name it... we ate it!

I could stop cooking now and we could eat just the leftovers for a week!!! 😋

It was the BEST visit, it always is - my folks are so much fun!

From this tasty ham we made Ham and Bean Soup (you know it!), egg muffins and the day they left I made a yummy pot of Split Pea Soup - that is one of Dan's favorites. Gotta love a great ham!

Do you have to glaze a ham? Absolutely not, BUT glazing the ham adds additional flavor and a beautiful crust!

Hams at the grocery store are smoked and are fully cooked. They simply require heating. A spiral cut roast is a little more expensive because they have been pre-sliced, but both will work!

How do you score a ham?

This step will take a few minutes but you'll so happy you did. The cloves infuse the ham with deep flavors making it even more delicious!

Be sure to allow the ham to rest before serving and take this time to remove the cloves also. The flavor is too strong for most people to enjoy.

No cloves? Substitute with ground cloves or allspice mixed into the glaze. About ¾ teaspoon will suffice.

How long do I heat a fully cooked ham?

Ham is cooked when you purchase it, so basically you're just reheating it the ham. At 325 degrees it will take about 10 minutes per pound.

Cook the ham with the cut side down to help keep it moist and tender!

Do you have to glaze a ham?

Not at all! Since a ham is fully cooked to begin with, glazing it just gives it a little something extra!

You can substitute several different types of homemade jam in this glaze - marmalade, plum, strawberry even grape jelly! Don't have homemade jam? No worries! Buy it at the store, you will love this recipe, I promise!

Do you cover it when glazing?

No, once you begin glazing the ham do not cover it.

Why did it turn out tough?

It's tough because it probably didn't get heated completely through. It will best to allow it to bake at a low temperature slowly in the oven.

How long does Glazed Ham last in the fridge?

Leftovers need to be refrigerated. Wrap the ham in foil to keep it from drying out.

Ham will keep in the fridge for up to a week! Leftovers can be transformed so many different ways!

If you don't think you'll use the ham in a week, be sure to wrap it well and freeze it. It will last 45-60 days in the freezer.

I've "found" some ham in the freezer that had been there much longer and made soup and it was delicious. It's all about how well it's sealed!

The best way to reheat?

Place it in a roasting dish with a little water in the bottom of the pan. Cover it with foil and reheat is in the oven at 325 degrees until it reaches an internal temperature of 145 degrees.

If you want a caramelized crust on the roast, tuck it under the broiler at the end of cooking. It will take less than five minutes. Be sure to watch it carefully though. The glaze is filled with sugar and will burn easily.

Still have leftover ham? Here are a few more recipes to try!

Amazon Disclosure: Some of the items below contain affiliate links; I am a participant in the Amazon Services LLC Associates Program, an affiliate advertising program designed to provide a means for us to earn fees by linking to Amazon.com and affiliated sites. However, I only promote things that I love and think you will love, too. For more information, please see our Disclosure Policy.

I love this roasting pan, I have a pan just like that was handed down to my from my Grandma!

Try this recipe and love it? Please give me a five-star rating below, I know you’ll love this recipe! If you snap a photo and share it please tag me #bowlmeover or @bowl_me_over so I get to see your photos! 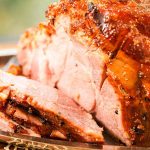 Orange Marmalade Glazed Ham - Why stand in line to buy an expensive glazed ham when you can make one at home that is even more delicious? Easy too - let me show you how!
Prevent your screen from going dark
Prep Time10 mins
Cook Time2 hrs 30 mins
Total Time2 hrs 40 mins
Course: Pork
Cuisine: American
Servings: 10 servings
Calories: 1122kcal
Author: Deb Clark
Cost: $20
As an Amazon Associate I earn from qualifying purchases.

If you have any leftovers, they are great for scalloped potatoes, ham and cheese omelets or ham salad and whatever you do.....don't throw away the bone! That makes the BEST soup! Of course you can buy a pre-glazed ham at the store but truly, you'll be happier with this because it tastes so much better! Steps to score a ham -