These Crescent Cinnamon Rolls are so simple to make and are an easy breakfast treat! Plus, they're delicious treats for weekend mornings or holiday breakfasts when you want something special but don't have a lot of time.

Be sure to try this recipe for Yeast Rolls - so soft and delicious!

Why you'll love this recipe

✔️ It uses just a few simple ingredients that you probably already have in your pantry, which means you can avoid a trip to the grocery store.

✔️ It's an easy recipe that anyone can make and cleanup is a breeze.

✔️ These are perfect for Christmas morning and taste great with a cup of coffee when an unexpected guest stops by!

For the exact measurements, please refer to the printable recipe card at the bottom of this post.

This is an overview of the instructions for the fresh cinnamon rolls. For the complete directions just scroll down to the bottom!

The following are affiliate links. We are a participant in the Amazon Services LLC Associates Program, an affiliate advertising program designed to provide a means for us to earn fees by linking to Amazon.com and affiliated sites.

What is the center of a cinnamon roll called?

The center of a cinnamon roll is often referred to as the cinnamon buns. This is because the center is typically filled with a sweet, sticky, and fragrant mixture of cinnamon and sugar - YUM!

What is the difference between a sticky bun and a cinnamon roll?

Is a cinnamon roll breakfast or dessert?

Are cinnamon rolls and honey buns the same thing?

Refrigerate - these will last for 3-4 days stored in an airtight container in the fridge.

Freezer - you can freeze these cinnamon rolls by individually wrapping them in plastic wrap and then placing them all in a freezer-safe bag. They will stay fresh for 2-3 months.

Reheat - to reheat, place the cinnamon roll on a plate and microwave for 15-20 seconds until warmed through. You could also reheat it in a 350-degree oven for 5-7 minutes.

Don't forget to check out my Amazon storefront for some of my favorite products! 🛍️

If you love this recipe please leave a ⭐⭐⭐⭐⭐ rating! 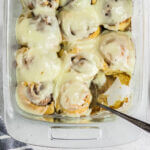