My brother told me a story when he & my cousin were driving out to the lake and they were stocking up on provisions. They would be hunting the entire week. Don said they had never tried hash before so they picked up a can. He told me it was the WORST thing he had ever tried in his life! Yeah....I understand that. I wouldn't have eaten the canned version either!

Well, yesterday I was in the mood for Hash. Because of stories like my bro's, I think most times, hash gets a bad wrap, but I personally love it!

Had some leftovers, a couple potatoes & a yam that I had baked off a couple of days ago. Perfect! That would give me a start. I diced them into bite sized pieces. 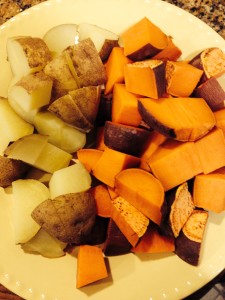 We need some veggies - red, yellow & green pepper (diced)- though I dashed to the store to get a jalapenos pepper, which I seeded and diced very finely (don't skip that!)  Jalapenos add a really good layer of flavor and if you removed the membrane & seeds and dice them finely you won't feel the heat! I also added a small yellow onion & half of a red onion. 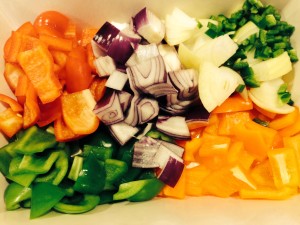 What brings the hash together is parsley, green onions & garlic - all finely diced. 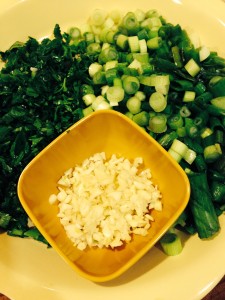 Ok...here we go! I heated a giant pan over medium heat on the stove top with 2 tablespoons olive oil & one tablespoon butter. I put the veggies - potatoes, peppers, red & yellow onions. Season them lightly with salt & pepper. (If you're me, you'll add a pinch of red pepper flakes too.)  Don't stir them very often, as you want to get the potatoes crusty and the veggies browned and delicious - it takes 20-30 minutes, so keep an eye on it. Stir it occasionally,  drink a glass of wine and revel in how marvelous your kitchen smells! 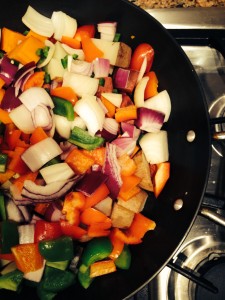 When the potatoes & veggies are browned & delicious, toss in the garlic. Saute them for about a minute until they become fragrant, then add in a couple big handfuls of spinach. I know your pan will seem way overfull, but it won't take but a minute & they will wilt down quickly. If you want to add meat, now's the time. If you have any leftover ham, pastrami, shredded chicken, etc. add that in & let it warm thru. 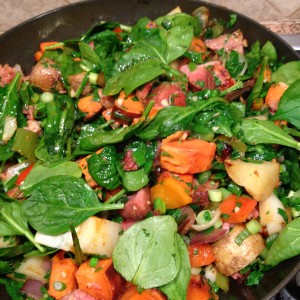 Now's the time to add the parsley & green onions. Saute for about a minute & then add a cup of cheddar cheese on top (optional of course!). Cover & melt the cheese & you're done. 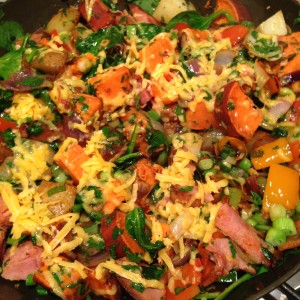 My goal initially was to keep it light and just veggies, but right when I got to the end, I added some leftover ham to it - but that isn't necessary at all. You can have great flavor with or without the meat! Hash is a great use of leftovers. Keep it light by limiting the oil in the pan - the veggies will saute & brown without adding too much oil or butter.

Glass of red wine and you're set for dinner, I hope you enjoy this as much as we did!